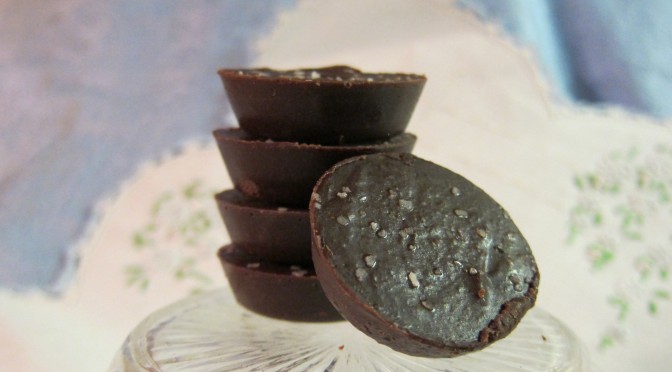 I saw this recipe, and knew I wanted to try it.  I tweaked a few things that I think make it easier, and more allergen-friendly. That recipe called for using a food processor, which I find a pain to clean and use when it’s just a small amount of stuff.  So I opted for just warming it over the stove, that worked fine.  While I, personally, am not allergic to peanuts, I have a niece and two nephews that are allergic to them so I wanted to see if sunflower-butter would work.

Sunflower butter and I kind of have a love-hate relationship.  I love that it can replace peanut butter in many recipes.  I hate that it has such a strong flavor (at least the three brands I have tried do).   I try to counteract that flavor by adding other flavors: enter the cinnamon, and vanilla extract.

And when I see cinnamon and chocolate, my mind automatically goes to mexican hot chocolate, so I decided to add just a pinch of cayenne pepper. The recipe also didn’t have enough sweetness for me, so I added 2 packets of stevia to it.

Just so you can learn from my mistake, I will tell you why it is important to use liners or a silicon cupcake ‘tin’.  I thought I could just put them in a metal tin without liners, thinking I could just whack them out, or warm the bottom and them easily pop them out.

When I tried whacking it, I banged the tin so much I almost bent the tin in half.  All that effort, and just one popped out.  I tried running a toothpick around the edges, but that ended up dragging a lot of chocolate with it. I tried warming up the bottom, but because coconut oil melts easily, a ten-second water bath resulted in too much melting, and I couldn’t get them out.  What finally worked was letting them sit on the counter for a little bit and then using a spoon.  They finally popped out, but not without some carnage where the spoon was. 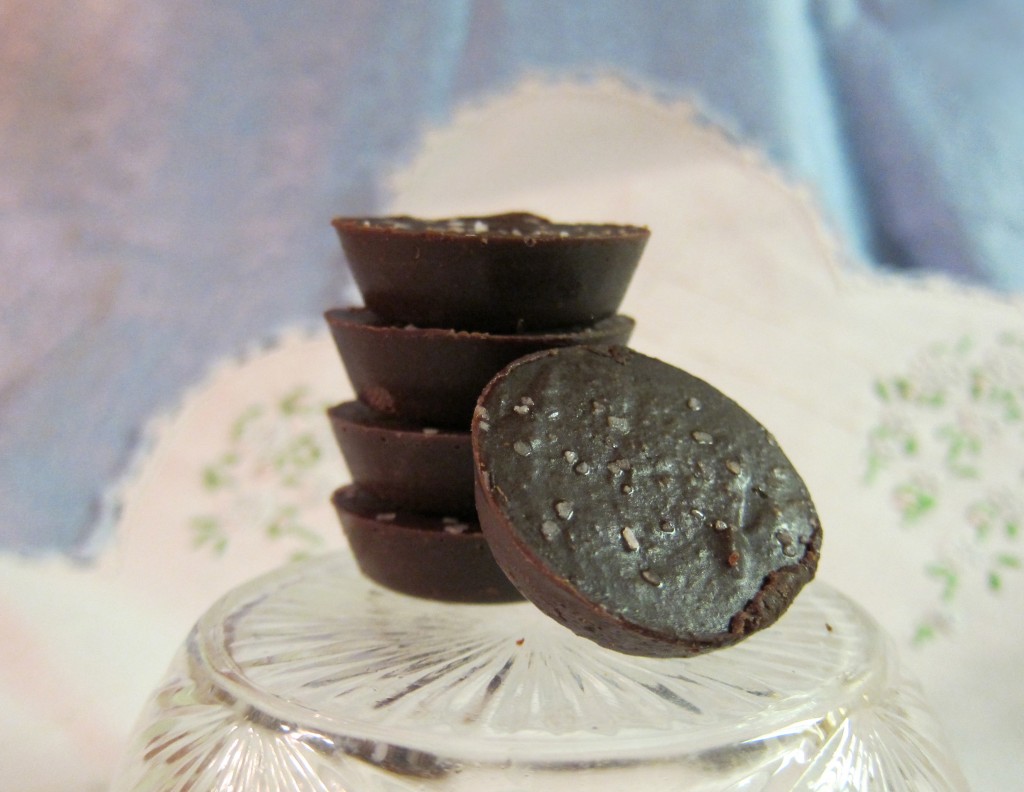 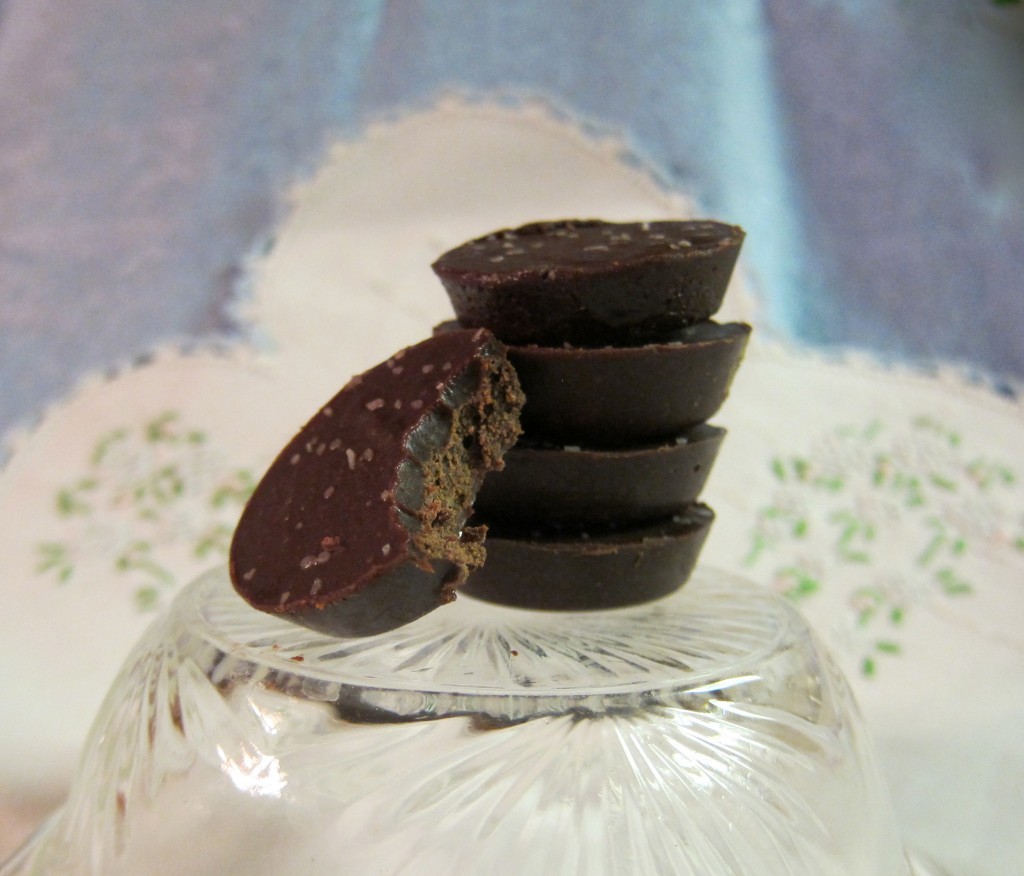 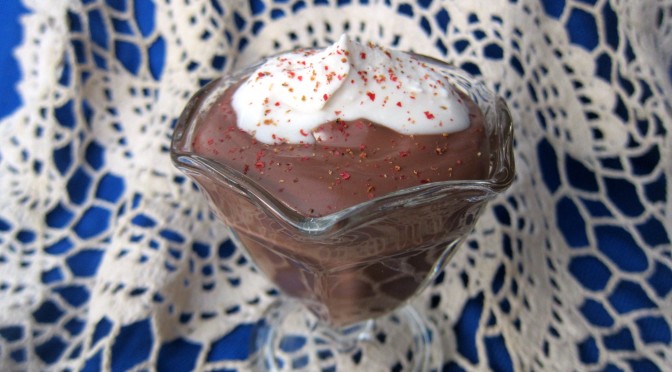 I have a confession to make.

I have kind of an obsession with pink peppercorns.  When I went gluten-free, dairy-free, and egg-free, I began to drown my sorrows in  a discovery of new spices and new vegetables (e.g. Jersusalem Artichokes, and Celeriac…that’s another post).  One of these spices was pink peppercorns.  Not actually related to black peppercorns, this spice shares a lift bit of heat implied by its misnomer, but also has an almost floral scent to it.  I created this recipe and submitted it to the So Delicious 3-Course Recipe Contest at godairyfree.com.  It’s a winner for me regardless. 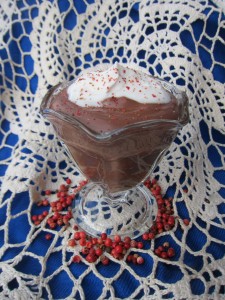 Yeah, I said it.  Chocolate…Creme…Brûlée.  Simply portion the pudding in your preferred porringer (okay enough alliteration).  Choose a dish that is heat-safe like a ramekin.  Smooth out and chill.  When ready to serve, sprinkle on about 1/2 a tablespoon of sugar over the pudding.  Shake dish to evenly spread the sugar.  Use a kitchen torch to melt the sugar and create the hard top.

Click Here to see one technic to melting the sugar for a creme brûlée. 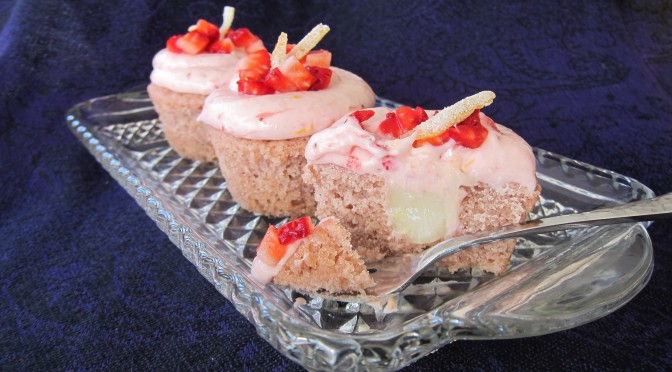 Strawberry cupcakes were one of the first gluten-free cupcake recipes I attempted to make.  The first time I attempt, well, they ended up looking like they were cooked with a golf ball in the center.  They sunk almost to the bottom of the cupcake tins.  Okay, maybe not that bad, but they required a ridiculous amount of frosting to hide it.

No pictures of those.

One good thing though, I was able to get the texture right, and texture is such a hard thing to get with gluten-free baked goods.  After researching online about sinking gluten-free cupcakes, I found that I was not the only one who suffered from that ‘sinking feeling.’  Two of the common culprits: over-mixing, and over-leavening.

If you add too much leavening (baking powder and/or baking soda) it causes cupcakes to do the opposite of its intended purpose? Crazy, I know, but true.  So after adjusting the amount of baking powder, as well as changing the technic for mixing to help prevent over-mixing.  The result was delicious, and to make it even better? Add a filling, and what better filling than a lemon curd to make for a strawberry lemonade flavor. 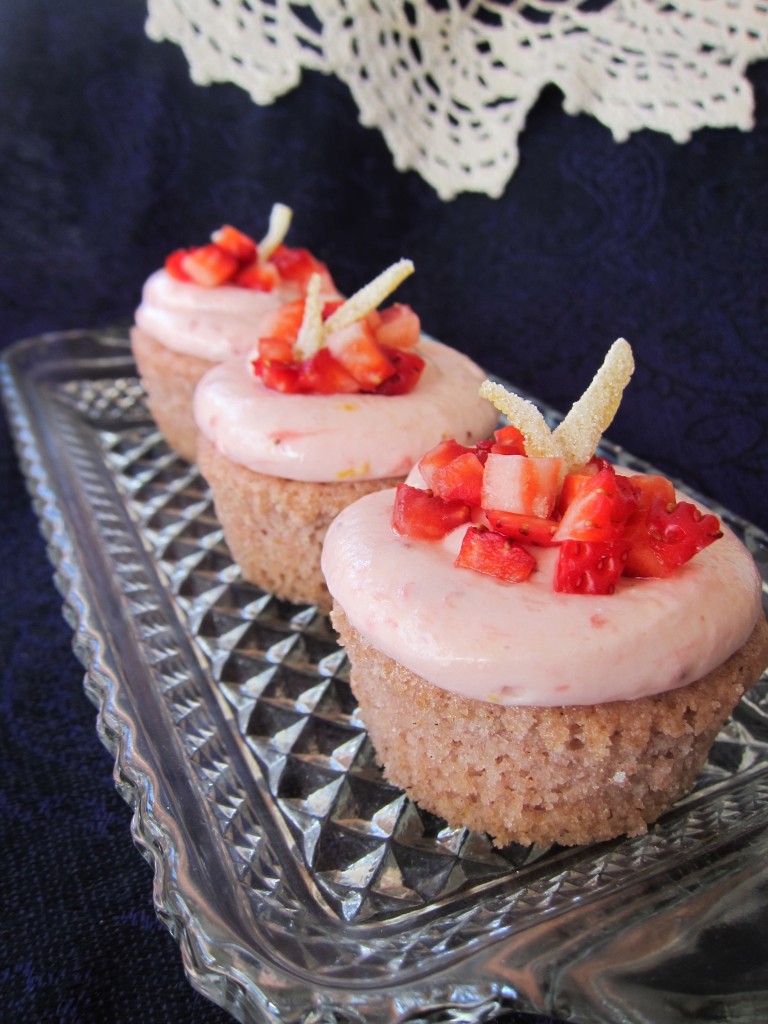 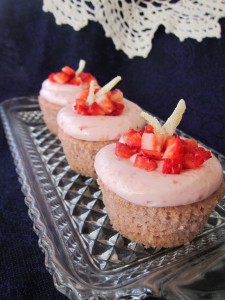