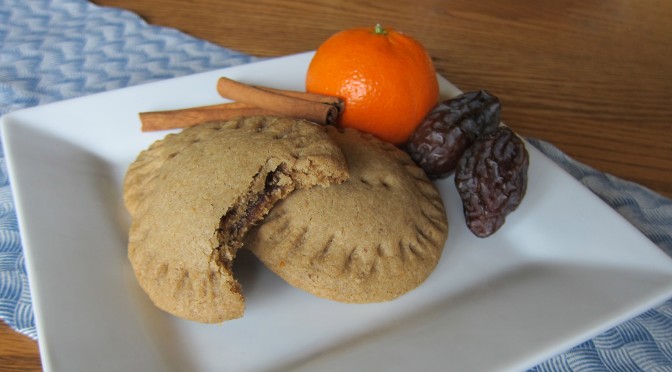 One of the best Christmas presents I ever got was a cookbook that my Grandma L made for each of her grandchildren containing all of her recipes.  It is such a treasure.  I especially like how she would write comments in them, or telling the story about the recipe.

I was looking through all of the recipes the other day and came across this recipe for Date-Filled Cookies.  The part that grabbed my attention was what she wrote after.

“This is one recipe that Papa always took with him when they went on their annual Elk/Deer hunting trip. They stay very moist. If you like dates (the kind you eat), you will like this cookie.”

This gets me not only because of the comment about specifying the type of date she was referring to, but I also like the mention of Papa.  Because he passed away when I was barely 4, I never really knew him, nor do I have any real memories of him.  So with this recipe, I saw an opportunity, in a very small way, to connect to him. 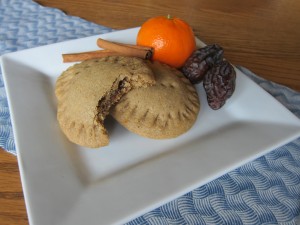 Yields 36
Write a review
Save Recipe
Print
Filling
Cookies
Filling
Cookies
By One Fine Tomato
One Fine Tomato http://onefinetomato.com/
I did change the recipe a little bit (other than the obvious to make it gluten-free).  I used less sugar (if you can believe it), and did away with the eggs.  I also changed the recipe by adding some orange zest and cinnamon.  I wonder what my Papa would’ve thought of these. 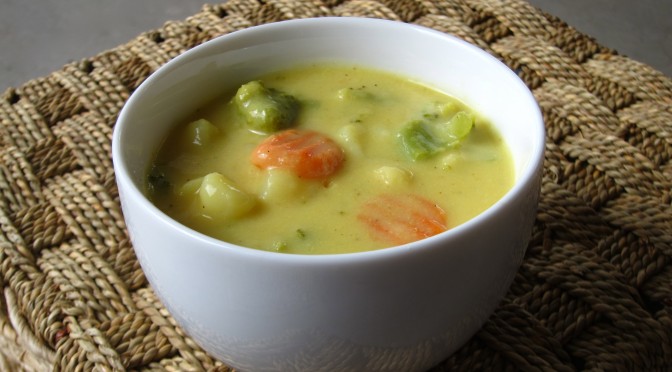 This cheese soup recipe is another comfort-food classic for our family.  This is surprising since there are quite a few vegetables in it, but then I do remember my brothers would take their time ladling the soup to try and get as few vegetables as possible.

While I can no longer serve it in the bread bowls we’d usually have it in, I was able to figure out how to make it without the original recipe’s cheese whiz, half and half, butter, and flour. 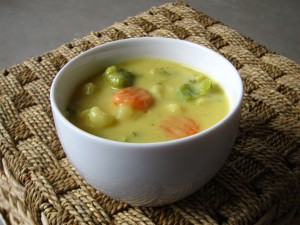 Serves 8
Write a review
Save Recipe
Print
Ingredients
Instructions
Notes
By One Fine Tomato
One Fine Tomato http://onefinetomato.com/
According to what my Grandma wrote on the original recipe, this recipe freezes well.  I can’t attest to that, however, because with our family, there were never leftovers to freeze. 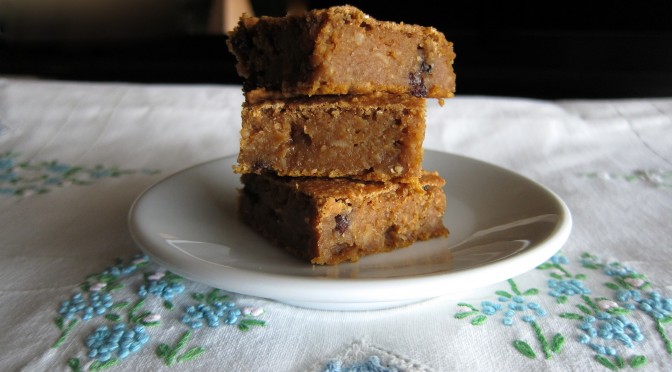 Since the beginning of the year, my mom has been off of sugar.  She has much more self control than I do.  Maybe if I didn’t have to be off of gluten, eggs, and dairy I could do it, but 3 major food avoidances is all I can handle.

The only treats she has had are clementines, a piece of toast with jam, or some date balls I had made.  I wanted to see about making her a real treat.  I had seen a plethora of posts about brownies or blondes made with beans, so thought I would give it a go.

I tried a garbanzo bean blondie recipe once before, and I don’t know if it was all in my head, but all that I could taste were the beans.  Consequently, I was hesitant to have another go at it, but  I decided to try it again, this time using more spices to conceal the pungency of the garbanzos.

So I knew I was going to use spices, and what better ingredient to go with spices than pumpkin?   I looked at a half-dozen recipes for bean blondies.  Many called for sugar, which I had to avoid for my mom’s sake.  Many also called for oil and/or peanut butter, which I also wanted to see if I could avoid.  To solve those problems, I substituted maple syrup for the sugar, and a little extra pumpkin for the fat.

Like what I do with my pumpkin cupcakes, I cook the canned pumpkin and spices for a few minutes so they don’t taste like a can or jar.  I also used currants instead of the typical raisins because they can be more evenly distributed in the batter.  If sugar isn’t a concern then using Enjoy Life Mini Chocolate Chips would be a delicious choice.

This recipe doubles well (as long as your food processor has the capacity, of course).  I just use a full can of pumpkin when I double it. The blondies also freeze well.  I cut them into square and put each square in a little snack bag.  Great for a little guilt-free treat.

Write a review
Save Recipe
Print
Prep Time
7 min
Cook Time
30 min
Prep Time
7 min
Cook Time
30 min
Ingredients
Instructions
By One Fine Tomato
One Fine Tomato http://onefinetomato.com/
These were a hit not only with my mom, but also with my dad.  I didn’t tell either of them at first that there were beans in it, and when I revealed the ingredients, they were shocked, but they still went in for seconds (and in my dad’s case, thirds and fourths).